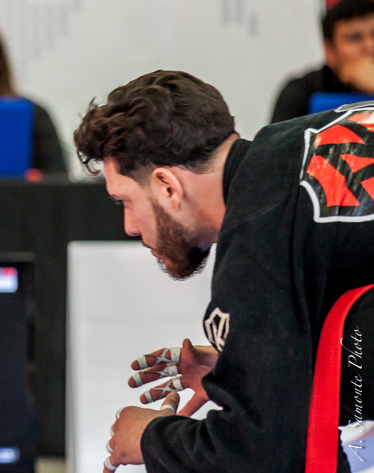 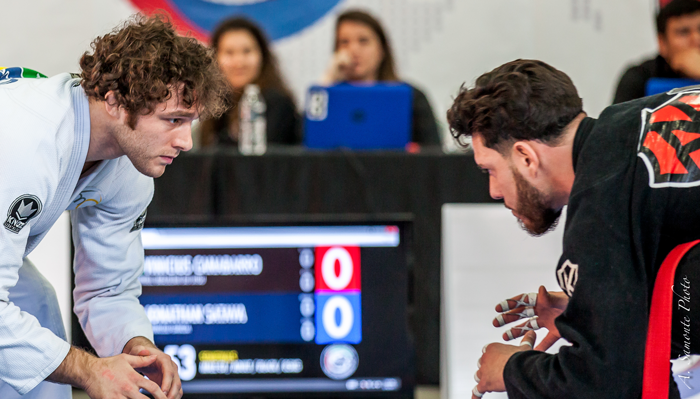 How competing as a new black belt taught me more about Brazilian Jiu-Jitsu than I’ve ever learned before
(author Vin Canabarro on right vs JT Satava, left)

When people set off on their journey in BJJ, many have a single goal in mind: getting their black belt.

So what comes after you get your black belt?

After 8 years of training BJJ, I was honored to have been awarded my black belt by Tim Burrill this past January. As an active competitor, this meant a daunting reality: competing in the black belt division against guys I’ve looked up to for years.

There is a certain confidence that comes with competing as a colored belt in that the opponents you’re facing have been training approximately the same amount of time as you, give or take a year or two. But in the black belt division, all that changes. Now I could face competitors with decades of experience, who may have been competing as a black belt the day I stepped on the mats as a fresh-faced white belt. They are school owners, accomplished instructors, and highly experienced competitors.

For many BJJ practitioners, achieving the level of black belt may signify the end of competing, or maybe even a long delay until one may feel they are “ready.” But I saw it differently. Not only was it NOT the end of my competition days, I wanted to wholly embrace the challenge that stood before me. I wanted to compete to truly test myself! To me, the only way to do that was to dive right into the competition circuit. Time off would only make it more nerve wracking and intense once I came to finally face my challenge.

Only a week into my black belt I competed in my first tournament. I fought my hardest but lost. One week later I faced another tough opponent and lost, but not without a fight! That same day I competed in the absolute division and gave myself an achievable goal: fight to win but do NOT get submitted.

Now you may be thinking, “Wow…this guy expects to lose…how’s that a goal?” But it’s all about proper perspective. Of course, I never expect to lose. I always believe in my mind that I can beat any opponent no matter their age, size, rank, etc. But what I learned from my previous two matches as a black belt was that focusing my goals (and patience) would be my key to success at black belt.

That next match I fought my hardest as I always do and in a close match I lost on points…but I didn’t get submitted. So was my ultimate goal achieved? No. But did I achieve a shorter-term goal? Absolutely. And that meant progress.

I went into the next tournament the following week with a similar mindset, setting my short-term goal a little higher: win my first match. And guess what? I did, 14-0. So regardless of what else happened that tournament, I considered it a success, which helped me keep a positive attitude as I trained for my next tournament.

Because of how I set my goals, I can consider these first 23 days a success because my goals didn’t start and end at the top of the podium. And that’s what I hope you take away from this post. The key to achieving your long term goals is to set smaller, short term goals. The smaller the goal is the easier it will be to accomplish. The reward is the positive momentum you gain, which helps propel you towards your ultimate goal. Small goals help you reach bigger goals, which help you build your dream. And you can apply this into anything in life.

This same concept of setting short-term goals can apply to colored belts too. Some examples could be when rolling with a higher rank try to give 100% the whole round, then maybe next time try not get subbed for a whole round. The next time try not to get swept or passed and so on. Those are winning battles as far as I can see.

At competitions, don’t stress yourself out with the pressure of winning. Begin with just showing up to the tournament (MOST practitioners don’t actively compete, so this is a win in my book). Then set a goal of preparing perfectly, going through a planned warmup and having a gameplan. Even if you lose, if you were prepared and made the effort to execute your gameplan, you’re setting yourself up for success. Also, realize that other competitors are human—just as nervous and and make mistakes, get tired, and can have bad days just like us!

Remember to always believe in yourself regardless of the challenge because we all know there’s a fight with our mind as well as on the mat. In order to achieve these short-term goals we have to believe in ourselves and win that mental battle!

If there’s one thing I can leave you with from this article is do not be afraid of challenges—they do not break us but they make us who we are! Competing isn’t only about medals. It’s about testing yourself for you! Competing can be great to improve overall technique and to grow mentally tough. It will reveal who you are and expose your weaknesses, strengths and will to fight. I think if you train jiu-jitsu you should compete at least a few times a year to give yourself a challenge and help you continuously progress.

Now if you just got ranked and you’re thinking about waiting to compete, erase that thought and compete—you will not regret it! What better place to start than at the Tap Cancer Out Connecticut BJJ Open?

This guest post was authored by Vin Canabarro, a black belt out of Tim Burrill BJJ in Providence, Rhode Island. You can follow his journey at vinjitsu.com or at @vcanabarro on Instagram.