What Inspired One Grappler to Raise more than $7,000 to Fight Cancer 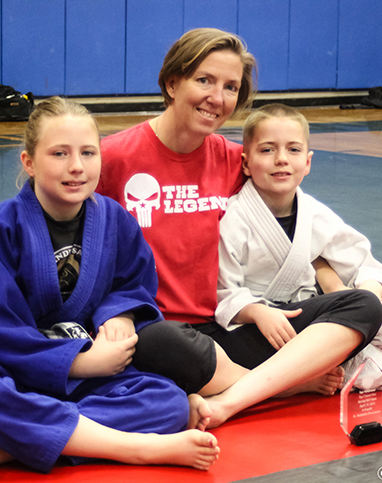 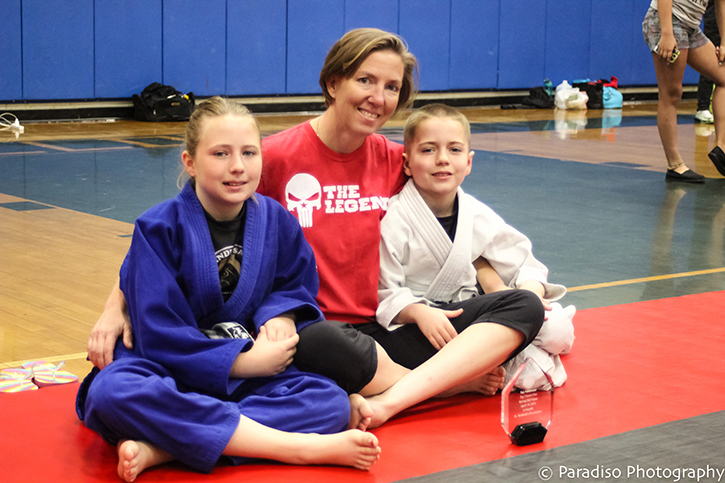 After raising an incredible $7,037 at our 2015 Connecticut BJJ Open, we caught up with Richelle Treece, a white belt from Sandro Sampaio BJJ (all the way in Oklahoma!) who was our top individual fundraiser in 2015, to learn a little more about her story and hear about her experience.

What inspired you to start training Brazilian Jiu-Jitsu with your children?

My kids started training in BJJ as a promise to my late husband. He’d told me that jiu jitsu was a foundation in his life, especially growing up. It helped him to control his anger, gave him an outlet and taught him how to improve his body and his mind. He wanted his kids to also have that foundation.

I started training with my kids to show my son I could lose and not get mad and show my daughter I could lose and not cry. My kids can be balls of emotion and I found that just saying “don’t get mad” or “geez, don’t cry” really wasn’t making an impact. I decided to be an example.

What inspired you to sign-up for the tournament and travel across the country to participate?

I was at a tournament talking with another competitor when the topic of why I was competing came up. When I mentioned I’d lost my husband to cancer, the other person said they’d heard of a tournament that raises money for cancer research. I went online and the found Tap Cancer Out website. I was really moved by the organization and what they were doing.

My goal was to show them that what may seem like a small thing could grow into something so much larger than themselves. I knew we had to go. Its crazy, because I knew it was going to cost me a fortune just to get there but I really didn’t care. I could work more hours after we got back to pay it off. I also wanted to give the kids a way they could honor their father. This was his sport and they could raise money to help combat the disease that stole away their Daddy.

What was the most memorable from your experience at the Tap Cancer Out BJJ Open?

Probably the moment I remember the most and almost still chokes me up happened during my match. You have to remember we came from Oklahoma and didn’t know a soul there in Connecticut. My matches came up and I obviously didn’t have a coach. I won my first match – though I don’t really remember how and moved on to the second round to fight for the gold. It was a good match though I know to an outsider it probably was as exciting as watch paint dry as far as our experience and veracity level, but it was pretty challenging for me. We were getting down to the end and truly had no idea how I was doing or what I was doing. Suddenly I had a voice that came thru all the noise hollering my name – somebody had sat down and started to coach me. I had no idea who it was, but I listened and worked to do what they said. The match ended, and it wasn’t until the ref raised my hand that I realized I’d won. I looked towards what was an empty chair when I started to see who was coaching me and it was [Tap Cancer Out Founder] Jon Thomas. As they put the first gold I’d ever won around my neck I looked to him and with tears in my eyes mouthed, “Thank you”. It’s strange to say that moment brought me closure. I was helpless when my husband was sick – there was nothing I could do for him; but this man and this organization provided me an avenue to prove to myself that I can be powerful. I made a difference.

Can you describe your experience being a part of a Tap Cancer Out BJJ Open?

One thing the event gave me was a chance to say thank you to so many people. As I started fundraising I took the time to jot notes to people that made an impact during the years my husband was sick. I let people know we what we were doing, printed the little business cards and used Facebook as a tool. When the donations started coming in I was truly humbled. I hoped to raise $1,000, then $2,000 when we were coming up on $5,000 I was speechless. The thing that I really found cool was during a tournament the following year I received a message from the top fundraiser. He made the comment that he never thought he’d be able to raise so much money until we showed that it could be done.

How would you describe the Tap Cancer Out organization and the Brazilian Jiu-Jitsu community?

The organization is amazing. I don’t think there was one person who didn’t welcome us. The event was conducted in a professional and safe manner. I’ll even add in the fact the food truck that came for lunch had great food! I know it takes special people willing to be involved with this event to make it happen. What is only a day in a gym for us is months and months of preparation and anticipation for them. It’s amazing the amount of time they are willing to give.