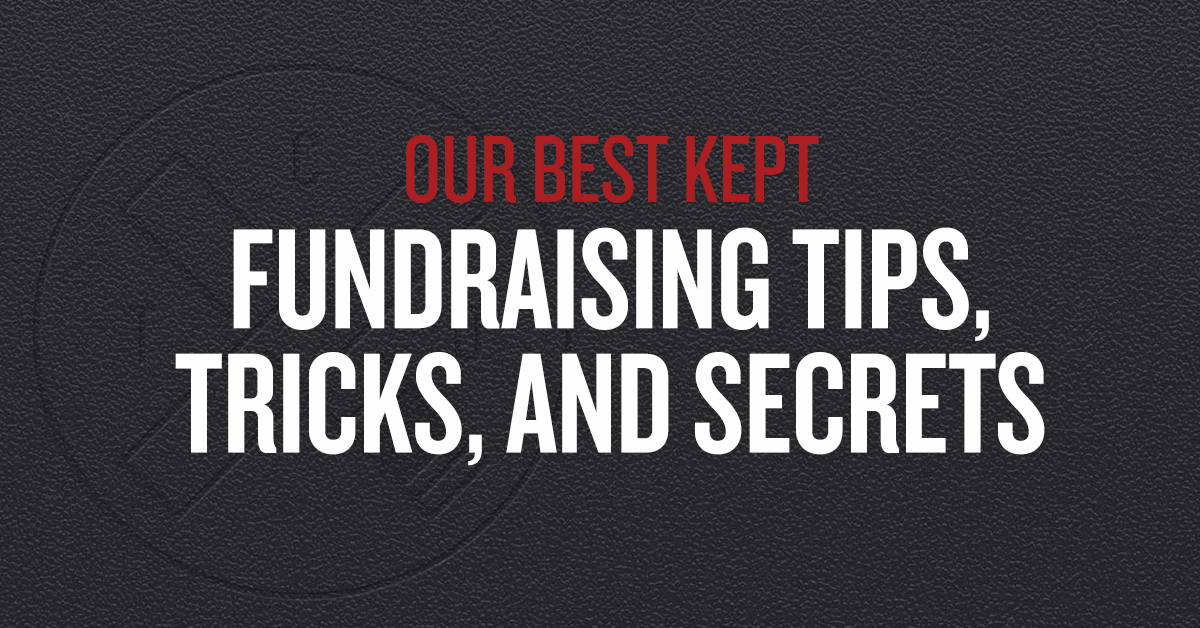 When I started Tap Cancer Out, admittedly I didn’t know much about running a nonprofit or even about fundraising. But over the last 9 years I’ve learned a thing or two, especially after seeing the innovative ways thousands of our competitors have appealed to their donors.

I wanted to write a post that combines all this useful knowledge so you can download it to your brain like when Neo learns jiu-jitsu in the Matrix! This way it only takes you about 5 minutes instead of the 9 years it took me 😉

These are also the methods I use each year when I set up my fundraising page and work with donors large and small. I’m by no means the best fundraiser but I want to do everything in my power to help YOU create the most impact and earn the most rewards!

I’ve broken down my tips into four topics:

I’m certainly proud of what we’re doing here at Tap Cancer Out, but the plain truth is that most donors don’t even know who WE are. They know who YOU are. And they probably care about you a whole lot too and would love to support a cause near and dear to your heart.

Talking about cancer is actually something we, as humans, rarely do. Most people probably don’t know how cancer has affected your life. By customizing your page with your personal story about cancer and including it in your Facebook, Instagram, and Email copy when you’re sharing your fundraising page, you’ll make a strong emotional connection with potential donors.

We highlighted four different highly successful fundraising pages that hit on a lot of the tips we’re outlining here, including telling a compelling story.

Check Out 4 Fundraising Pages We Love

Sharing fortune…feeling good…making a difference…because we were asked – there are so many reasons people give. But research has found that public recognition flat out works in motivating others to donate. And the promise of public recognition works for even the smallest donors, not just people who want to get their names on buildings.

Years ago we saw this best executed on Facebook where fundraisers would consistently share their page in their feed and tag their latest donors. This not only thanked those who had recently contributed, but motivated those who had NOT yet donated to do so. 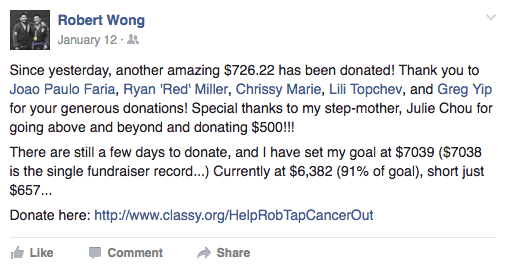 Take stock of the things Robert did well:

Lately we’re seeing a lot of “thanks” happening on Instagram Stories where fundraisers will screen shot the donation notification, post it to their story, and thank/tag the donor in a shout out! In the photos below Andrew Kimball, a 2x Top Individual Fundraiser (in the same year!) not only thanked his donors but raffled off the swag he earned! 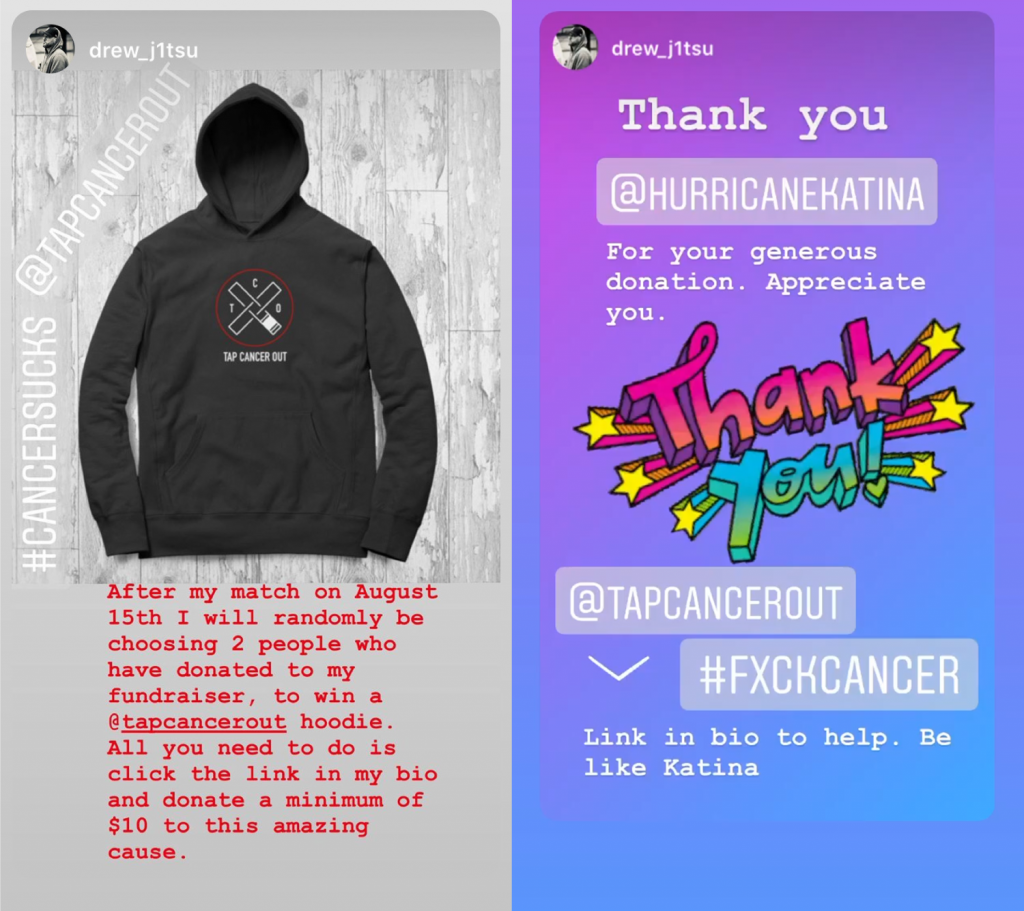 Why would thanking someone else motivate someone to donate? FOMO (fear of missing out). People want to be involved, especially when it’s for a good cause. No matter how modest someone is, public recognition of their good deeds is always appreciated and people will donate for the added benefit of seeing their name tagged in a recognition post.

Just remember, if you thank one you have to thank them all. But that gives you a reason to continually share the link to your fundraising page without constantly asking for people to donate.

Places to Thank Your Donors:

Notice in this hypothetical example that the fundraiser had an initial goal of $500, but once that was reached increased their goal to $1,000. It’s VERY important to always have an attainable-but-not-yet-reached goal so donors can feel the added benefit of helping you get closer to or even exceed your goal. Being that donation that puts a fundraiser over their goal is such a great feeling so you always want to make that attainable.

Once your fundraising efforts are done, you’re rewarded by having the opportunity to compete at a well-organized, super-positive jiu-jitsu tournament and snagging some awesome swag. But your donors don’t have that same payoff. So it’s important to provide them with their own reward once you’re fundraiser is over and/or you’ve reached a certain goal.

TIP #3 – GIVE YOUR DONORS A PAYOFF

Let me be clear – I’m not telling you to pay your donors!! Instead, I’m suggesting you give them some sort of “payoff” or reward(s) either during and/or after your fundraising efforts conclude.

Some of our most successful fundraising efforts included a “payoff” at the end of the allotted fundraising time (usually after the tournament). Dustin Mixon took a pie to the face for every donation of $100 or more to his fundraiser. Ryan Ferguson shaved ONLY HALF off his face and head for a brief amount of time. Rick Owens and his Global Grappling Day partner consumed 5 EXTREMELY HOT sauces on a live stream. 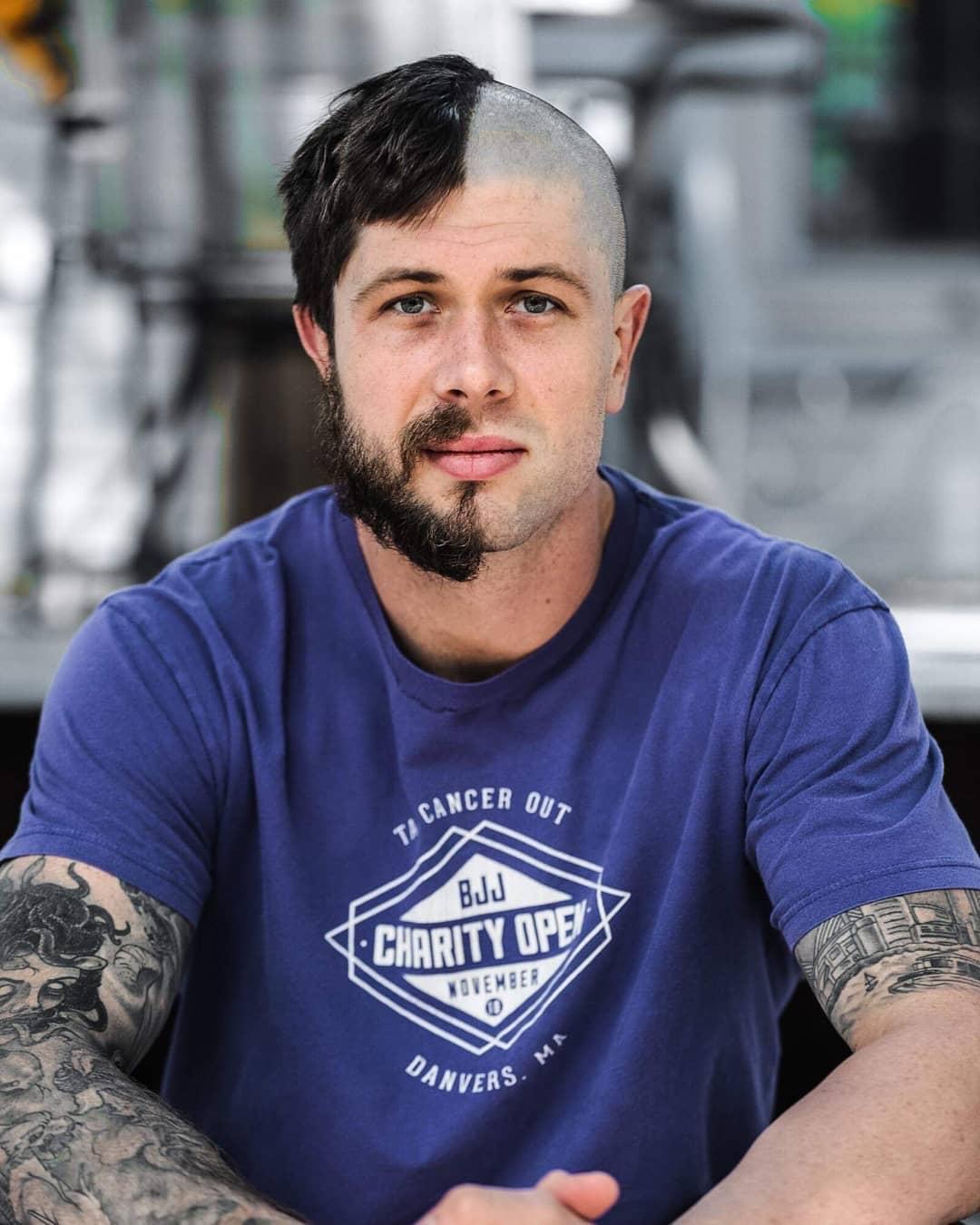 Pictured above, Ryan Ferguson shaved exactly HALF his head and beard after hitting his (first) fundraising goal!

Whatever it is, the more value a potential donor sees in their gift (beyond the awesomeness of supporting TCO and our beneficiaries), the more likely they are to give.

If there’s one thing I’ve learned about fundraising is that donors LOVE to procrastinate and they LOVE a deadline. Did you know that 33% of all donations are received in the final week before a TCO event, including ~10% on the very last day!?

TIP #4 – TURN UP THE VOLUME IN THE FINAL WEEK

Many fundraisers assume that by the final week of fundraising momentum has slowed and donors are tapped out. But that couldn’t be further from the truth. It’s actually when fundraising is most active and donors are most ready to give. Why? Because donors are highly motivated by deadlines. When you’re a month out from a Tap Cancer Out event a donor may tell themselves they’ll get to it next week (and then end up forgetting). But when they know they’re about to run out of time, they are far more likely to give.

1. Communicate an end date
Even though our fundraising pages stay open for weeks/months after the event, it’s best to tell your network that the fundraising deadline is the day of the event. That way they know exactly when they need to get their donation submitted and you in order for you to maximize eligibility for awards and perks.

2. Create a countdown
You’ll see us create a countdown on Instagram leading up to the final day of registration, and you should do the same leading up to the tournament. You don’t have to create unique imagery (though it’d be pretty cool if you did). Just make sure to post your link on your FB, Twitter, etc. each day with a reminder of how many days are left for your family and friends to contribute.

3. Be extremely active the day before the event
Even if you’ve made no effort to fundraising and it’s now the eve of the event, you still have a great opportunity to create impact. The day before the event is the most active day of donating. Hop on your social channels, record Instagram stories, post your page to your feed, tag friends and family…do whatever you can to get people’s attention as this is the day you’ll most likely day you’ll be able to encourage your network to donate.

I know this article was extensive, and if you’re still reading this you deserve a standing ovation! But I also think you’re now in a fantastic position to create massive impact fundraising.

This is everything I know. All the secrets I’ve found along the way. But it’s not *everything.* Each TCO event I learn something new from our incredibly creative, thoughtful, and hard-working fundraisers.

If you have any questions, fire them my way!!